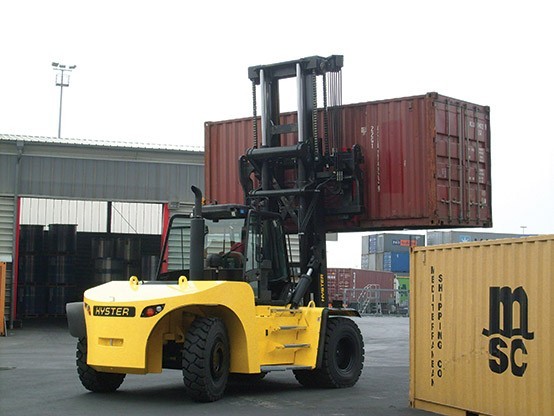 A worker fell from a second-storey level through an opening that should have had a guardrail to protect workers from injury. Robert C. Nearing Holdings Inc. operates a Canadian Tire outlet in the City of Thunder Bay.

On June 11, 2019 a worker was requested by a co-worker to go to a storage area behind the auto repair bays of the facility to assist in retrieving two boxed barbeques from storage. The co-worker had been directed to retrieve the items by the store manager.

The storage facility was constructed by joining three “sea-cans” – intermodal shipping containers – side by side, then stacking the same size and number of containers on top to create two levels of storage capacity. Access to the top level was afforded by means of a set of stairs leading to a metal walkway running the width of the joined container fronts.

The walkway had a series of upright posts on the side opposite the containers. Across from the entrance to each second-storey container was a removeable chain between posts, which, when removed, allowed access for a forklift to deliver or remove storage items.

The total width of each gap created by removing a chain was 97 inches. If the forks of the forklift were inserted into the gap, an unprotected opening between the forklift’s mast structure and the posts on one or both sides would remain, the width of which depended on placement of the forks. The width of the mast was 42 ½ inches.

On the day noted, the two workers were on the second-storey walkway to retrieve the boxed barbeques. The chain opposite the entrance to a storage container was removed, and a forklift, operated by a supervisor, was moved to the gap, with the forks extending into the gap.

The two workers removed a barbeque from the container and loaded it onto the forks. They then removed a second barbeque and were in the process of stacking it onto the first. One worker stepped off the walkway with one foot through the opening, and fell to the ground. The unprotected opening the worker fell through was 46 inches wide. The height of the walkway surface above the ground was 8 feet, 7½ inches.

Robert C. Holdings Inc. was found guilty of a contravention of the Ontario ‘Industrial Establishments’ regulation 851/90, section 14 which states,

(a)  have a top rail located not less than 91 and not more than 107 centimetres above the surface to be guarded;

(c)  if tools or other objects may fall on a worker, have a toe-board that extends from the surface to be guarded to a height of at least 125 millimetres; and

(d)  be free of splinters and protruding nails.”

(2) “A guardrail shall be constructed to meet the structural requirements for guards as set out in the Building Code.”

I realize that the Industrial sector is not on the list to receive ‘Working at Heights’ training but I feel that after a fall accident in Industrial, Mining or Healthcare, the training should be upgraded to the full day program. It would go a long way in lessening fall accidents and make all sectors aware of their responsibilities, not just Construction.

HRS Group Inc. has a great team that can help you with all your health and safety needs including ‘Fall Protection’ and ‘Working at Heights’.