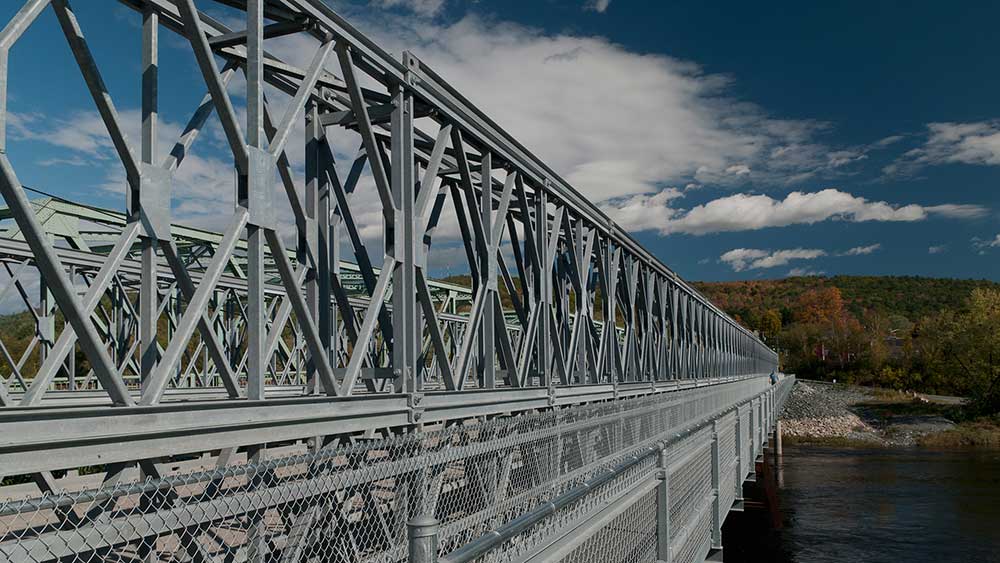 A worker, employed by R.M. Belanger Ltd., was killed when a bridge that was being jacked into place collapsed. The company failed to take the reasonable precaution of ensuring a safe procedure was used for jacking down a temporary modular bridge.

R.M. Belanger Ltd., of Chelmsford, Ontario, is a company engaged in public infrastructure construction projects, such as the building of roads and bridges.

In 2019, R.M. Belanger Limited contracted with the Ministry of Transportation Ontario (MTO) to replace a culvert at Angler Creek, just west of Marathon, Ontario on Highway 17.

A 120-foot-long temporary modular bridge was to be assembled and installed to carry road traffic in order to accommodate replacement of the existing culvert. The bridge was assembled on the road on the east side of the creek, then pushed across the creek on rollers and set down on concrete landing pads. On August 14, 2019, a crew of eight Belanger employees were at the site.

One of the workers on the crew was not involved in moving or jacking the bridge but was involved on the site as a driver, and bringing other workers tools and water as needed.

Lowering the bridge was to be accomplished by using two bottle jacks on each corner. One jack would take the weight of the bridge while cribbing was removed from one side of each cribbing tower. A second jack would then take the weight while the first jack was removed and cribbing taken from the other side of the tower. The bridge would thus be lowered one step at a time by releasing pressure with a valve on the bottle jack.

At one point, in the process, it was observed that a jack at the northwest corner was starting to lean. The supervisor went to that corner to observe the jack. While the supervisor turned to return to the work station, that jack tipped over, allowing the18-ton bridge to collapse. It tipped from the jacks at three of the corners.

The worker who was not involved in moving or jacking was sitting on the concrete landing pad and was crushed by the frame of the bridge, suffering fatal injuries. Another worker suffered non-critical injuries as the bridge fell and moved to the side.

The worker who died had about 15 minutes earlier been sitting on a pile of discarded cribbing but had been asked to move.

An investigation by the Ministry of Labour, Training, and Skills Development could not determine the exact cause of the bridge collapse. However, a number of factors were found to have contributed to the collapse and the resulting fatality:

On February 26, 2021, the company was convicted under the same violation of the OHSA and fined $210,000 when a worker was killed at a golf course near Sudbury. That worker was struck by a wooden telephone pole while it was being loaded with a forklift onto a trailer.

R.M. Belanger Ltd. was found guilty of a contravention of the Ontario Occupational Health and Safety Act (OHSA) section 25, subsection 2(h) which states,

(h)     Take every precaution reasonable in the circumstances for the protection of the worker.”

Two major accidents Belanger was found guilty of just last year. There are four in total.

If the reader needs more information, then please review the following blog posts from this site:

It sures looks like we have a very dangerous company here. The data does not lie! Too bad it is the same old story, contract full steam ahead and to hell with safety!