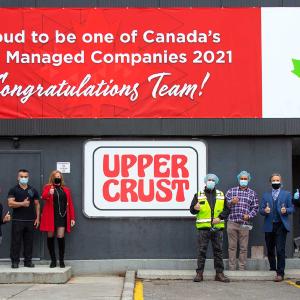 Two workers were killed in separate incidents a year apart. One worker was fatally injured after being struck by a tractor-trailer that was backing up; another worker was pinned against moving machinery.

The first fatality took place at the company’s 55 Canarctic Drive location on October 25, 2018. On that date, a temporary help agency employee of 1936297 Ontario Inc. was working as a general production worker on the bread assembly line at the Canarctic location. The worker was fatally injured after being struck by a tractor-trailer reversing up to an exterior loading dock.

The tractor-trailer was operated by an employee of Stones Transport Inc., a federally regulated truck transportation company. At the time of the incident, smoking was only permitted outside of the building in a designated smoking area. The worker had completed a work shift and left the building.

Closed circuit television (CCTV) security video recorded the worker wearing a white lab coat crouched against the exterior wall of the building, below the edge of one of the loading docks, smoking and using a cell phone. The worker remained in that position without moving for eight minutes, during which time the tractor-trailer driver arrived to be loaded with bakery products and proceeded to back toward the loading dock.

Prior to reversing into the loading dock bay, the driver reported exiting the truck, opening the rear trailer doors, looking in the direction of the loading dock, and sounding the horn twice. The tractor-trailer was also equipped with red lights visible from the rear during reversing and an audible back-up beeping alarm that was operating at the time of the incident. The driver proceeded to reverse slowly toward the loading dock, briefly pausing twice, until contact was made with the exterior wall of the loading dock, fatally injuring the worker between the truck and the wall.

Police confirmed the reversing safety devices on the tractor-trailer were operational at the time of the incident. The external lighting in the loading bay area was also determined to be within acceptable limits by a Ministry of Labour, Training and Skills Development ergonomist.

After the incident, the company, in response to orders from the ministry, installed additional signs alerting pedestrians to the danger of reversing vehicles in the loading bay, developed and implemented a traffic plan, and painted safety markings on the pavement.

The second incident took place at the company’s 60 Marmora Street location on September 25, 2019. On that date, a temporary help agency employee employed by First Choice HR Solutions and working as a sanitation worker at the time of the incident was fatally injured after being pinned between an autoloader and an infeed conveyor.

There were no eyewitnesses but the incident was recorded by CCTV. Before the worker entered the perimeter fencing the machine should have been stopped and all sources of power should have been turned off/disconnected and locked out.

The company’s paper-based pre-operational safety checklists did not record that a panel of the perimeter fencing had been removed. Allowing a worker to have access to an unguarded machine with potential pinch points is an offence contrary to section 25(1) of the OHSA and section 25 of Regulation 851.

Upper Crust was found guilty of a contravention of the Ontario ‘Industrial Establishments’ sector regulation, section 20 which states,

“Barriers, warning signs or other safeguards for the protection of all workers in an area shall be used where vehicle or pedestrian traffic may endanger the safety of any worker.”

Upper Crust was also found guilty of a contravention of the same sector regulation; however, section 25 was used for the second accident which states,

“An in-running nip hazard or any part of a machine, device or thing that may endanger the safety of any worker shall be equipped with and guarded by a guard or other device that prevents access to the pinch point.”

There seems to be many types of hazards that the ownership is not aware. I would also venture a guess that a decent safety professional either is not employed there or has little or no voice. Same story, different place and time.

Their sign says, one of Canada’s best managed companies. I wonder if they qualified for that title before the deaths of the two employees…