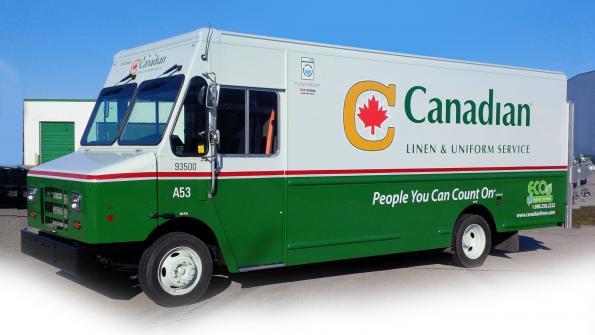 A worker, employed by Canadian Linen and Uniform Service of Toronto, Ontario was on foot outside a building was struck by a company vehicle. The lighting in the area was inadequate and insufficient to ensure the safety of workers in the area.

In the early morning hours of October 30, 2018, a worker employed by Canadian Linen was walking through a parking lot behind 20 Atomic Avenue (Building B) toward a building next door, also operated by Canadian Linen, at 24 Atomic Avenue (Building A). The worker was parked behind Building B and was walking between parked cars in the lot toward Building A until coming out into the open area.

The worker walked across the open area between the loading zone and the parking lot to access the entry of Building A and walked between two vehicles that appeared to the worker to be parked.

One of the vehicles, a Linen Service vehicle, started to move toward the worker in a left turn, and struck the worker. The driver of the vehicle was also a Canadian Linen employee and was leaving the workplace to begin making deliveries. The worker was injured by the contact with the vehicle.

The investigation by the Ministry of Labour, Training and Skills Development determined that the lighting levels in the area where the worker was struck did not provide sufficient illumination levels to ensure the safety of workers in the area.

The issue of inadequate lighting in the parking area in question had been raised by the workplace Joint Health and Safety Committee just prior to the incident.

Canadian Linen and Uniform Service was found guilty of a contravention of the Ontario ‘Industrial Establishments’ regulation 851/90, section 21 which states,

Where natural lighting is inadequate to ensure the safety of any worker, artificial lighting shall be provided and shadows and glare shall be reduced to a minimum.

This is contrary to the Ontario Occupational Health and Safety Act (OHSA), section 25, subsection 1(c) which states,

Canadian Linen and Uniform Service has three prior convictions in relation to three previous incidents:

I have written about the last accident with Canadian Linen and Uniform. Please review blog post #171 for more details.

As the reader can see, here we have a company that fails in all aspects of health and safety in the workplace. (4-time loser)

I would wager that they do not have a Health and Safety professional on staff. If they do have that special someone, that person is either unqualified or has no teeth to make any safety changes.

Too bad! It would save their reputation and save on the fines and surcharges the government of Ontario will attach to their payroll.