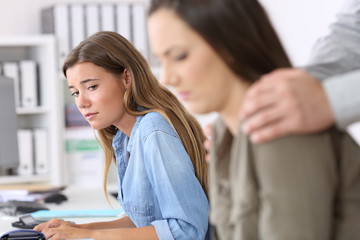 The proposed Sexual Violence and Harassment Action Plan Act, which the government of Ontario introduce as a Bill on October 27, 2015, includes a potential amendment to the provinces Occupational Health & Safety Act (OHSA) regarding inappropriate behaviour in workplaces

A backgrounder from the Ontario Women’s Directorate says the law, if passed, will require OH essay to define workplace sexual harassment specifically, enhanced the requirements for workplace programs on harassment and give new duties to employers regarding protecting employees, such as proper investigation of all worker incidents and complaints.

“These legislative proposals would put the strength of the law behind our commitment to make communities, schools, and workplaces safer,” Ontario Premier Kathleen Wynne says in a statement upon the bill’s introduction. “That is an important part of our roadmap to and sexual violence and harassment in this province.”

I have to say that I was surprised that it only took three years to bring it to the workplace. Normally, the time between discussion and the unveiling of the new law usually takes much longer.

As the reader can see, there had to be a few updates to the original legislation because it was too vague to be of any use to the employer and the MOL had a difficult time enforcing something new without a database of information to draw from.

HRS Group Inc. has a great team that can help you with all your health and safety needs including ‘Due Diligence’ and ‘Violence and Harassment’.