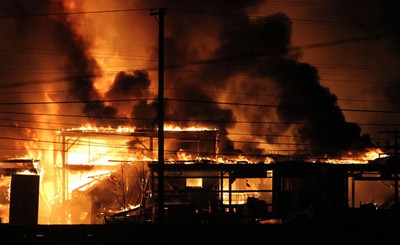 British Columbia Chief Coroner Lisa Lapointe announced on March 25, 2015 that an ongoing inquest into the fatal Lakeland sawmill explosion in Prince George in 2012 had been temporarily adjourned, citing newly disclosed information about subsequent investigations into the tragedy.

Inquest Council John M. Orr, Queen’s Council, reveals that lawyers for Lakeland Mill commissioned a separate forensic investigation into the blast and that WorkSafeBC has known about this for more than two years.

“I had started asking a number of questions during the inquest about whether or not the company had done their own internal investigation,” Orr says. “Initially, I was told no.” But Orr and his team discovered that Case Forensics (CF), a Seattle-based forensic-engineering firm, had done a very extensive investigation.

At first, Lake land legal team refused to release the information, citing client privilege. But the lawyers later relented. “And, so we get a USB stick with 30 gigs of information. This was a massive, really, really big investigation,” says Orr, who stresses that CF never compiled a report.

Orr adds that WorkSafeBC declined to meet with CF and except all of the latter’s information in 2012, instead proceeding with issuing its own report. “That raises a lot of questions about the WorkSafeBC report,” he notes. Orr requested the adjournment so he could “go through the case report, compare it to all the WorkSafeBC materials and see if we have got a problem, in that the WorkSafeBC report may not be reliable.”

Lapointe’s announcement came two days after the Western District of the United Steelworkers pulled out of the inquest because of issues with the way the investigations had been handled. “We were not satisfied that the proper questions were going to be answered,” United Steelworkers District 3 director Stephen Hunt says. “It was really turning into a public-relations exercise.”

Hunt charges that the inquest focus too much on what the employers and WorkSafeBC had accomplished since the disaster, and that it ignored the relevant facts. “There was an anonymous call from a worker who said, ‘I am afraid that this mill is going to blow up like Babine Lake,” he says, referring to a similar explosion at the Babine Forest Products mill near Burns Lake in January 2012. In addition, a fully qualified hygiene inspector visited the mill before the blast, but did not measure the dust level, Hunt claims.

WorkSafeBC’s investigations into both explosions had already come under heavy criticism, as neither had resulted in criminal charges. Last year, a government inquiry into the Babine disaster accused WorkSafeBC of handling evidence inappropriately, treating the disaster is merely an OH&S case rather than as a criminal one.

The Coroners Service of British Columbia says a date for the resumption of the inquiries will be set to soon as possible. Orr considered the adjournment a positive development. “We found a large amount of new information,” he says. “The strength of the inquest processes that we get to everything.”

This report was one of the strongest reports questioning the ethics of the WorkSafeBC that I have ever read.

I have always considered WorkSafeBC as a leader in ‘Health and Safety’ in the workplace but now I am not so sure.

Again, I will leave the door open and believe that this previously reputable organization got their act together and completed an ethically-exhaustive investigation. The workers out there need that!

Let the truth come out always!

HRS Group Inc. has a great team that can help you with all your health and safety needs including ‘Due Diligence’.